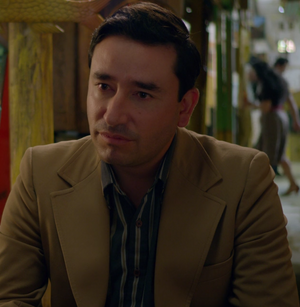 Alberto Suarez was an officer with the Colombian National Police. He was a corrupt officer as he was willing to give intel on police operations to criminals in exchange for money.

Ties with the DEA

Suarez was first hired by DEA agents Javier Peña and Steve Murphy to track down the murderer of Murphy's pet cat. Suarez did not take the offer seriously at first, but accepted the job upon a higher cash offering. Suarez interrogated two airport customs officials that stalled Murphy and scanned his passport when he arrived in Colombia, discovering that Murphy's information was sold to the Medellín Cartel, which allowed sicario Roberto "Poison" Ramos to kill the cat. The information acquired allowed Colombian police to authorize an ambush on Poison in collaboration with the DEA.

Despite Suarez being corrupt, the DEA would continue contacting him, hoping to find people who might know of Escobar's criminal record ahead of the 1982 congressional election. The DEA was able to retrieve photo negatives from the photographer who took Pablo Escobar's 1977 mug shot. In 1989, Murphy met with Suarez for the last time. Suarez laughed off Murphy's request and insulted him. In response, Murphy put a gun in Suarez's mouth, forcing him to give the name of Efram Gonzalez, an ETA bomb-maker who was recruited by the Medellín Cartel.

TIES WITH THE Medellín Cartel

Suarez's corruption led him to associate with the biggest criminal organization in town, the Medellín Cartel. Suarez would often deliver information on Colombian police and DEA operations to Pablo Escobar in exchange for money. After Suarez helped the DEA set up the ambush attempt on Poison, Suarez called Escobar to warn him, which led Escobar to call Poison just before he arrived at the staging point.

Suarez warned Escobar about the DEA's search for witnesses that could derail the drug lord's congressional campaign. Pablo ordered the murders of the names that Suarez had sold to the DEA.

After the harsh encounter with Steve Murphy, Suarez called Escobar to warn him about the agent's intentions, but Escobar was angry that he talked with the DEA. Poison was sent to Suarez's house where he shot and killed him.

Suarez was greedy and dishonest as he would work with anyone, including criminals, as long as the pay was sufficient, violating his duties as a police officer. He was stubborn and a hard bargainer. His dishonesty ultimately led to his death at the hands of Escobar.