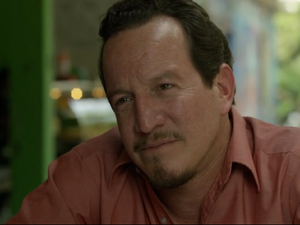 Carlo Cordova is a former Colombian army Major who served as the long-time head of security for the Cali Cartel.

Cordova was an officer in the Colombian army when he met Jorge Salcedo, one of the several new recruits under his command. Cordova liked Salcedo's affinity towards engineering, and they both formed a friendship. Sometime later, he got acquainted with the Rodriguez brothers, and soon led a private security firm for the brothers' cartel, and soon employed Salcedo under him.

In 1995, his carelessness led to the capture of cartel leader Gilberto Rodriguez Orejuela. The DEA had tailed him when he drove cartel accountant Guillermo Pallomari to Gilberto's hiding spot, enabling the Search Bloc to apprehend the cartel leader. Knowing that he is in trouble, Cordova quickly blames corrupt police captain Gustavo Calderon and attempted to flee the country with his wife. However, he was soon caught by the cartel members and was sent to one of Miguel's mansions to be tortured by Miguel's son, David.

Despite claiming innocence, Cordova and his wife were shot dead by David, and Salcedo, who was forced to witness the killings, was appointed as Cordova's replacement.