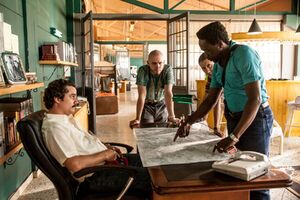 Descenso is the first episode of Season 1.

The episode begins in Bogota, Colombia in 1989. It is narrated by Steve Murphy. He talks about how hard it was for the intelligence agencies back then to capture a phone call, especially a satellite one. They capture Poison calling Lizard setting up a meeting in a local pub later that night. They use that information to inform Drug Enforcement Administration about it. They, in turn, pass this information to Horacio Carrillo who uses it to take Poison down. He kills many (innocent) people in that pub as a side effect of killing Poison and this fact is used as an illustration of what it takes to fight the drug business.

The event pictured is actually a flash-forward from what happens at the end of the Season 1. After the first scene and the series intro, the action rolls back to Chile, year 1973 for the real start.

The episode continues and introduces some characters: Cockroach, Pablo Escobar, Gacha and their role in the cocaine business the Medellin Cartel started.

Later there's a scene when the drugs cargo lead by Pablo Escobar is pulled over by the police. Pablo talks briefly to the police officers showing them he knows a lot about them and their families. By this, he demonstrates how deep he controls the police (even on the personal level) and how much the police officers have to lose. At the end of the conversation, he asks the police officers to choose between silver (being bribed to let them through) or lead (being killed by armed Pablo crew).

The show then shows the basic operation of the Cartel including how the cocaine is produced and trafficked.

Pablo discovers his deal with the local police was not kept and goes to the police station himself to find out why. It turns out the police found out how much cargo Pablo traffics is worth and they are disappointed on how small cut they get for letting it through. Pablo gets angry, yells at the officer and gets his mug shot. The whole situation is later erased from the registries (proving how powerful Escobar is).

Pablo believes that there was no way that the police could have known about the operation and deduces it needs to be some of his own people that told the police how much the cocaine is worth and finds that the person responsible for the leak is Cockroach (ironically through the same police officer who detained Pablo before) and has him executed soon after.

The episode ends with a TV footage of US president Ronald Reagan declaring a war against drugs and Steve Murphy (the narrator of the episode) taking off (with his wife) to Colombia for his duty as an Drug Enforcement Administration officer.