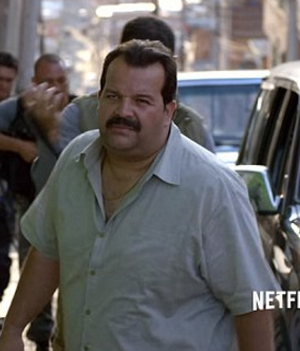 Diego "Don Berna" Murillo Bejarano was a important Medellin Cartel Member and later a leader of the United Self-Defense Forces of Colombia (AUC) and a drug trafficker.

Don Berna used to lead the Medellin Cartel's militia wing before he decided to leave the cartel after Gerardo Moncada and Fernando Galeano's murders in 1992. Murillo protected Moncada's widow Judy Moncada and her brother Jaime, and he advised against underestimating Pablo. Jaime arrogantly refused to listen and continued working at his coke lab in Medellin, where he would be shot in the forehead by Escobar himself after Escobar, Ricardo Prisco, and some sicarios raided the lab. He finally caused the desertion of his boss, Judy Moncada, sending her to USA in order to save her life from her own Cartel.