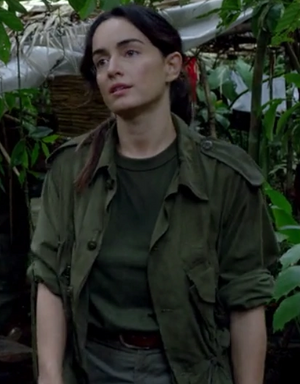 Elisa Alvarez was a Colombian student and the co-leader of the M-19 revolutionary movement during the Colombian conflict. In 1985, she defected to the Drug Enforcement Administration (DEA) after M-19 leader Ivan Torres made an alliance with Pablo Escobar and the Medellin Cartel, and she warned the DEA about the Palace of Justice siege before working with them against Escobar.

She became a communist while she attended the University of Antioquia; she became fluent in English while she studied there. Alvarez committed herself to the revolution, and she became the girlfriend of Alejandro Ayala and the co-leader of the M-19 group with Ivan Torres. In 1981, the trio stole the sword of Simon Bolivar from a museum, and Alvarez and her boyfriend celebrated by having sex at the guerrilla camp. That same year, they decided to kidnap the sister of Jorge Luis Ochoa, a major cartel boss who was in Forbes magazine. The kidnapping succeeded, but her boyfriend and the other kidnappers would be captured and killed by Pablo Escobar's MAS paramilitary, and their bodies were hanged from a tree in Medellin. Alvarez instead took refuge at the "liberation church" with a communist Catholic priest, and she would remain in hiding after the MAS attack. She worked at the church's hospital with DEA agent Steve Murphy's wife, and she was introduced to Murphy and his friend Javier Peña, initially believing Murphy's cover story that he was a janitor. However, Pena told her that they were both CIA whose goal was to prevent a Marxist invasion from Cuba, and Alvarez responded by saying that she was a communist guerrilla; the two men believed that she was joking.

Alvarez left the cause when she saw Torres meeting with Pablo Escobar and agreeing to a partnership, and she headed to warn Pena about an upcoming attack. Unfortunately, the November 1985 Palace of Justice siege proceeded, and 6,000 files on Escobar were burnt by the guerrillas.

Fearful that Pablo would kill her, she ran to the wife of Agent Steve Murphy, Connie Murphy, whom she also worked with, for help. Connie brought her to Agent Javier Peña, who gave her shelter.

Steve, furious at Elisa for putting his wife at risk, found out that Alvarez could help the in tracing Escobar to the siege, and reluctantly agreed to help her.

Shortly after, Elisa became a target to the DEA for being a known member of M-19, prompting Peña and Murphy to lead them away from her, as she escaped from the DEA under a new, false identity.