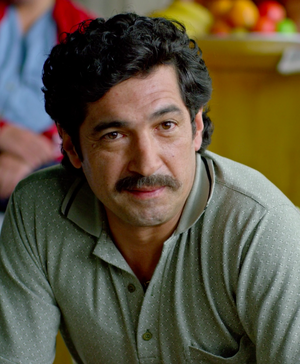 Fernando "the Wolfman" Galeano (died 22 July 1992) was a sicario for the Medellin Cartel of Colombia, working for Pablo Escobar. In 1992, Escobar had Galeano and Gerardo Moncada killed when he discovered that they hid money that they claimed was lost, in order to evoid paying Escobar's high taxes.

Fernando Galeano was born in Medellin, and he was recruited into the Medellin Cartel by Pablo Escobar, who became the godfather to Galeano's two children. In 1991, Galeano and Gerardo Moncada were both given control of the day-to-day operations of the Medellin Cartel while Escobar was in "prison", but they were ordered to pay high taxes to compensate for Escobar's expenses during wartime. The two of them payed $250,000 every month, and Galeano and Moncada also began to negotiate an end to the Cali-Medellin war in 1992.

However, Escobar demanded $30,000,000 from Cali, and he also demanded that the war tax be raised to $1,000,000 a month, disaffecting Galeano and Moncada. Galeano and Moncada were both summoned to his prison, La Catedral, on 22 July 1992, where Escobar claimed that both of them had stolen money from him, as they had hidden a garbage bag stuffed with money at Galeano's farm in Rionegro. Escobar hit Galeano in the back with a pool stick before beating him to death, and he killed Moncada as well.