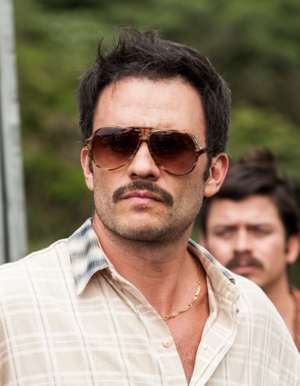 Gustavo de Jesus Gaviria Rivero was Pablo Escobar's cousin, best friend, and right-hand man for most of his career.

Gustavo was born on January 25, 1949, in Pereira, although it is likely he moved to Medellin at some point. His father was likely a brother of Hermilda.

Gustavo introduced Cockroach to Pablo, thus taking the first step in beginning Escobar's drug trade. Gustavo was placed in charge of all financial and logistical duties, and contracted Lion to smuggle cocaine into the US (Descenso). Gaviria was opposed to Escobar's political aspirations during the 1980s, saying that he could never become a politician, and he was even more angry when Escobar sanctioned the assassinations of politicians such as Rodrigo Lara and Luis Carlos Galan in 1984 and 1989, respectively. Gustavo saw these actions as immature reactions to Escobar being forced to resign from the Chamber of Representatives by Lara, an incorruptible politician who saw through Escobar's facade of being a paisa Robin Hood. Gaviria, however, would remain his cousin's most trusted advisor, even while Gaviria lied about having a sexual relationship with Marina Ochoa, the sister of the powerful Ochoa Brothers. Eventually, the Ochoa Brothers, working with Helmer Herrera of the Cali Cartel, decided to rat Gaviria out to General Augusto Jaramillo of Search Bloc to stop his relationship with their sister as well as to weaken Escobar. On 12 August 1990, the Search Bloc followed him as he headed to the Motel Leonera in Medellin for a tryst with Marina. Gaviria was surrounded by policemen and forced into one of their trucks, and he was driven to a parking garage, where he was tied to a chair. He refused to tell Colonel Horacio Carrillo the location of his cousin, so Carrillo introduced him to several relatives of the victims of his cousin's terrorism. He met the brother of a 17-year-old girl who died in a Bogota bookstore bombing that Gaviria coordinated and a man who was the son and brother of policemen that Escobar killed. The two of them beat him severely, but he refused to snitch on his cousin, telling them that they, their families, and their wives were going to die, and he maniacally laughed and shouted. Gaviria did not survive the beatings. Carrillo, in order to avoid being arrested for an extrajudicial killing, shot Gaviria's corpse several times and had his death reported as a shootout. His body was dumped in the Sabaneta neighborhood, and the police claimed that he had fired first before he was "gunned down". Gaviria was buried in the hills of Medellin, where he had played with Escobar when they were ten years old. Escobar was unable to attend the funeral due to security reasons, so he had La Quica hold a radio next to the Catholic priest as he delivered the funeral sermon, with Escobar listening to the sermon from a radio.

Gaviria's death marked the gradual decline of the Medellin Cartel. At some point, while Escobar (who was incognito) visits a park and gets seated on a park bench, a hallucination of Gaviria appears, and sits next to Escobar and lights a cigarette. The two converse and trade some lighthearted jabs. When Escobar said that everything declined since he died, Gaviria jokingly asks if he missed him, Escobar replies that he does. After a brief moment of silence, Gaviria tosses the cigarette walks away from the bench, leaving Escobar to his thoughts.

Gustavo's loyalty to Pablo was unwavering to the end. He used his innovative mind to help his cousin transport cocaine; such innovations included the use of produce trucks to hide cocaine, and the removal of the seats in Carlos Lehder's plane in order to increase the cargo capacity.

He also showed a genuine concern for the men who worked for him.