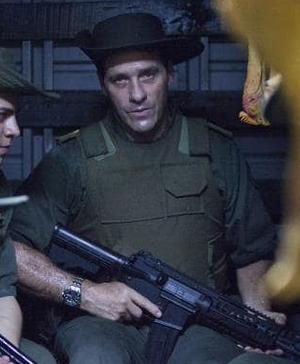 Hugo Martinez was a Colonel of the Colombian National Police (CNP) who succeeded Horacio Carrillo as the commander of the Search Bloc. Despite his traditional and conventional method of operation, he led the raids which killed Pablo Escobar and captured Gilberto Rodriguez Orejuela, two of Colombia's most powerful drug lords.

Born in 1941, Martinez joined the National Police at a very young age and eventually rose to the rank of a Colonel. As a Colonel, he spent three years fighting the FARC rebels in the jungles of Colombia, earning him a deadly reputation.

After Colonel Carrillo's death in the hands of Pablo Escobar, Colombia's President César Gaviria and the United States ambassador Arthur Crosby agreed upon Martinez leading the Search Bloc, despite the colonel having no intentions to do so. Soon after the President gave a speech congratulating the passing cadets of the police academy, of which the colonel's son was a part of, the president asked the colonel to take charge of the Search Bloc. After learning that his son joined the Search Bloc, Hugo Martinez accepted the offer.

Unlike his predecessor, Martinez favoured ordered and methodical tactics in the hunt for Escobar, and had several grid searches over all of Medellin's neighbourhoods, a tactic which displeased DEA agents Javier Peña and Steve Murphy, leading Peña to turn to the Los Pepes for help. The American agent would supply Diego Murillo Bejarano of the Los Pepes with all the classified intelligence gathered by the police, leading the vigilante group to turn up at the safehouses of the Medellín Cartel and kill everyone before the police could arrest them.

After Carlos Castaño Gil of the Los Pepes tricks the colonel's lieutenant son and holds him at gunpoint, only to have him saved by Peña, the colonel slightly berates his son. After noticing his son's skills in radio tracking, he assigns him on a more technical job: to triangulate the position of Escobar's sicarrio's based on their radio signals. Martinez also tells Peña that if anyone should capture or kill Escobar, it should be a Colombian policeman, referencing Peña's affiliation with the Los Pepes.

Sometime in 1993, Martinez leads an unsuccessful raid on a Medellin cartel base set up in Montecasino to attack the leadership of the Cali Cartel. Escobar was not present in the hideout, but the raid destroyed the last of Escobar's manpower, leaving him only with his driver Limón.

By late 1993, the National Police discover that Escobar is back in Medellin. Martinez Jr., using radio triangulation, locates Escobar in the Los Olivias neighbourhood. Martinez, accompanied by Trujillo and DEA Agent Murphy lead the raid, which ultimately results in the death of the cartel boss and his driver. The raid made Martinez popular among the public.

Two years later, Martinez still worked as a highly respected colonel in the CNP. He attends a meeting between President Ernesto Samper and the Americans, where Peña runs into him and enquirers about the colonel's son and the current situation with the Cali Cartel's rise to power. Martinez then arraigns the DEA agent for letting the Los Pepes loose, leading to the Cali Cartel's rise to power.

Later, Peña shows up at Martinez' doorstep and asks for his help to lead an operation to capture Gilberto Rodriguez Orejuela, the de facto leader of the Cali Cartel. Martinez secretly transports his highly trained team from Bogoto to Cali while avoiding the local policemen, who are largely in the Cali cartel's payroll. Martinez' team hid in the truck as Peña and the local police raid another house far away, apparently looking for Helmer Herrera. After declaring his raid unsuccessful, Peña tells Gustavo Calderon, the local police chief, to drive to a friend's mansion, which was actually Gilberto Rodriguez's hideout.

As Peña arrives, Martinez presents his warrant to Calderon, and announces that he's taking over, and has Calderon held captive in his police car as Martinez raids the house with Peña and Trujilio. After securing the house and its inhabitants, the CNP located Gilberto Rodriguez hiding under a bathtub. Calderon uses this time to trick the guard stationed out, and escapes to a payphone where he telephones for help from the local police.

Martinez and Peña load Rodriguez in the back of the truck, and made a run to the airport, avoiding the local police on the way. They also have DEA Agent Chris Feistl drive a decoy. The truck carrying Rodriguez arrives at the airport, but however the plane they're supposed to board is surrounded by local policemen. As Peña expresses his disappointment, Martinez calmy steps out and walks to the police officers, all of they having their guns drawn out. There, he chides the cops for working for money instead of the safety of the country, leading all of them to lower their guns and give way to the Colonel. Back in Bogoto, the colonel announces the arrest of the most powerful mob boss in Colombia to the general public.

In an effort to secure Gilberto's release, his son Nicholas Rodriguez presents papers, found in an earlier raid at Guillermo Pallomari's office, to corrupt officials claiming that the Colonel received bribes from the cartel, discrediting the colonel and forcing him to resign. After the Colonel turns in his gun and badge, he travels to the United States embassy where he informs Peña of his decision.

Martinez continued to live on until the age of 76, where he would pass away from a heart attack on March 23, 2020.