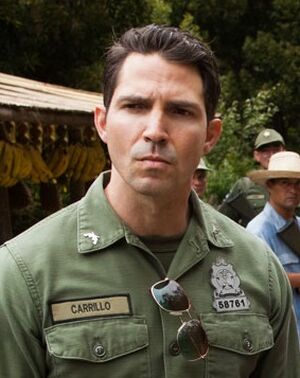 Horacio Carrillo, also known as Colonel Carrillo, was a colonel of the Republic of Colombia and formerly head of the Search Block police unit.

Horacio Carrillo was the first head of the Colombian national police's Search Bloc unit, which was formed in the 1980s with the assistance of the United States. Carrillo's task was to hunt down and bring to justice the infamous narcos, the drug barons that were more dangerous than any rebel group in the country. He constantly cooperated with the US Central Intelligence Agency and Drug Enforcement Agency, who used spy planes to pick up conversations from satellite phones and identify the speakers, allowing for them to track down drug barons.

On many occasions, the Search Bloc would go in guns blazing and massacre the cartel members, such as the 1989 La Dispensaria raid in the Modelia barrio of Bogota. Carrillo himself led raids such as La Dispensaria, the Tolu raid, and the Copacabana farm raid, but the accidental killing of hostage Diana Turbay in the last raid led to President Cesar Gaviria accepting Pablo Escobar and the Medellin Cartel's offer of "surrender", in which Escobar could be "imprisoned" in a new villa that he built. In addition, the Colombian government struck down extradition in 1991, and Search Bloc was disbanded due to Carrillo's rough play style. Carrillo was posted to Spain, ending his war with Escobar temporarily.

In 1992, following the deaths of eleven policemen in a grenade and gun attack on a police station in Medellin, Carrillo replaced Colonel Pinzon as the leader of Search Bloc, returning to Colombia. Carrillo was the only man who Escobar feared, and he marked his return by leading 100 men into the Barrio Escobar to urinate on an Escobar mural. He also rounded up the young spotters that Escobar employed to report on the movements of the army in Medellin, executing a fiesty one to make a point. A great success would follow with a raid on the largest of the late Gerardo Moncada's labs, arresting Escobar's sicario "Gato". Later, Carrillo would throw him out of a helicopter when he refused to give information on Escobar, and Carrillo became infamous once more. An interview of one of the captured child spotters by Valeria Velez led to Carrillo having negative publicity, as he was portrayed as a child-killer and an American puppet.

Colonel Carrillo decided to lead a raid on Apartment 98-3 on 9th Street in the city of Medellin when Maritza Rincon tipped off the DEA about Pablo Escobar's planned meeting with his accountant at that location. Agents Pena and Murphy were forced to stay behind by their boss Claudia Messina, who did not want them to be caught up in Search Bloc atrocities. Carrillo and his convoy were ambushed by Medellin gunmen, and Carrillo was severely wounded by several gunshots. Escobar himself then arrived and confronted him, shooting him in the leg with a bullet that Carrillo had sent to Escobar via one of the captured spotters as a warning. Escobar taunted Carrillo with this, and he shot him several times to avenge his cousin Gustavo. Carrillo's death was a major blow to the Colombian government and the hunt for Escobar. Hugo Martinez, a veteran of the FARC conflict, became his successor.