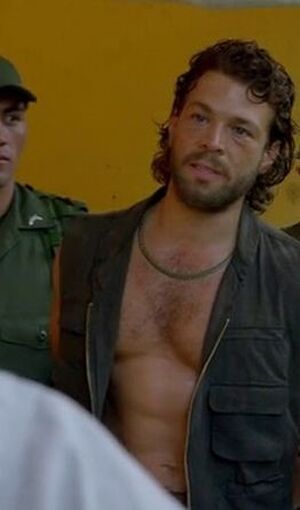 Carlos Lehder is a Colombian-German smuggler who was a high-ranking officer in the Medellin Cartel.

Lehder was born on September 7, 1949, in Armenia, Colombia, to a German father and a Colombian mother. His father ran a used car dealership, which led Lehder to start smuggling cars from the United States; soon, he had started smuggling marijuana as well. He was caught and spent a term in a federal prison in Danbury, Connecticut, where he became familiar with cocaine. As such, when he was approached by Lion, he knew the potential of the business he was getting involved in. He soon flew to Colombia and met with Pablo Escobar, and it wasn't long before he became part of the Medellin Cartel (Descenso).

Lehder was described by Steve Murphy as being "half Colombian, half German, and 100% playboy." He was a neo-Nazi who was influenced by both Adolf Hitler and John Lennon. He was known to be a megalomaniac, and the lifestyle on his private island, Norman's Cay, was reminiscent of Sodom and Gomorrah.