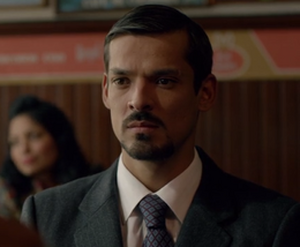 Lugo is a Colombian security guard who provided security for Pablo Escobar's family under the orders of Attorney General Gustavo de Greiff.

Lugo notices Tata Escobar using a radio communicator to talk to Pablo, and he manages to obtain the frequencies used. He contacts his friend Trujillo, and requests a meeting with an American agent, Steve Murphy. Murphy and Trujillo travel to Bogota, and meet Lugo in a coffee shop, where he passes on the radio frequencies. When Murphy states that he is unable to provide cash or visa, Lugo angrily asserts that he has no intentions to migrate, and wants the DEA to kill the drug lord and restore order in the country, and storms off.