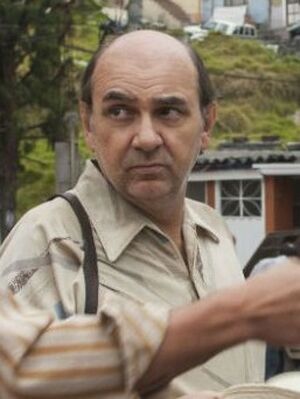 Cockroach was operating out of Chile when he was caught by the Chilean government. He, along with his entire gang, was sentenced to death, but the firing squad missed Cockroach himself. He escaped by playing dead among the dead bodies until the guards had left. Realizing the danger he was in if he stayed in his country, he made the decision to move his operations to Colombia.

Cockroach needed to find a Colombian smuggler with a good reputation to oversee the sales of his product. Seeing the Ochoa brothers as being too soft, and Gacha as being too hard, Cockroach decided to pitch the idea to Escobar. Pablo accepted his agreement, but Cockroach still demanded his share of the profits, as well as autonomy over his labs. He was further incensed by the creation of the Medellin Cartel, which he feared would cut him out of the deal, or wind up on the wrong end of Gacha's shotgun.

To avoid the use of Carlos Lehder and Lion, Cockroach hired German Zapata to sell his product in Miami. Furthermore, he revealed the Cartel's operations to Jose Herrera, a DAS agent, in exchange for allowing his own operations to continue. When Escobar discovered this, he had both Zapata and Cockroach killed. The latter was not as lucky this time as he had been during his first execution.

Cockroach took a great amount of pride in his work, calling himself an artist. As such, he was very uneasy, even paranoid, when someone like Escobar tried to go over his head. This caused him to be stubborn and insubordinate, which would ultimately lead to his death.

Cockroach was played by Chilean actor Luis Gnecco in the series premier, Descenso.