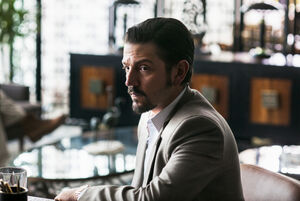 Felix Gallardo is the leader of the Guadalajara cartel.

Born on a ranch in Bellavista, on the outskirts of Culiacán, Sinaloa, Félix Gallardo graduated from high school and studied business in college. He took a job as a Mexican Federal Judicial Police agent. He worked as a family bodyguard for the governor of Sinaloa state Leopoldo Sánchez Celis, whose political connections Félix Gallardo used to help build his drug trafficking organization. Félix Gallardo was also the godfather of Celis' son Rodolfo.

Félix Gallardo started working for drug traffickers brokering corruption of state officials, and together with Rafael Caro Quintero and Ernesto Fonseca Carrillo, who previously worked in the Avilés criminal organization, took control of the trafficking routes after Avilés was killed in a shootout with the police.