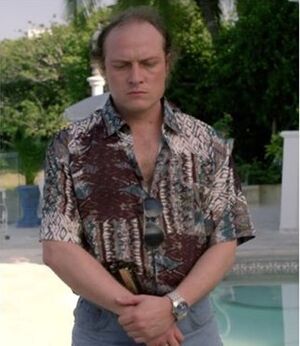 Navegante was an associate of the Cali Cartel who worked as one of their sicarios. He infiltrated the Medellin Cartel.

Navegante became a sicario of the powerful Cali Cartel. Navegante was sent to the Medellin Cartel in 1989 at the start of the Cali-Medellin conflict, which was caused by José Rodríguez Gacha's attempts to expand the Medellin Cartel into New York City, turf which had already been claimed by Cali. Navegante sold out Rodriguez to the DEA, meeting with Agent Javier Peña. Navegante's information was put to use by Colonel Horacio Carrillo, who raided Rodriguez's mansion in Cartagena. The Search Bloc captured one of his fleeing guards and interrogated him, leading to the 15 December 1989 Tolu raid and the deaths of Rodriguez and his son Fredy Rodriguez Celades.

Navegante eventually returned to the Cali Cartel, and he was involved in several murders during the Cali-Medellin war against Pablo Escobar and his Medellin cartel. He was frequently seen as a bodyguard for the Cali bosses Gilberto Rodriguez Orejuela, Miguel Rodriguez Orejuela, and Pacho Herrera, and he accompanied Herrera to Miami in early 1993 to help in taking the city from Escobar. Navegante then garroted Escobar's man from Miami, "El Leon", when he arrived in Colombia to meet with Herrera, ensuring that Cali would have complete control of Miami.

Navegante was shot and killed by Jorge Salcedo during the episode Going Back To Cali.