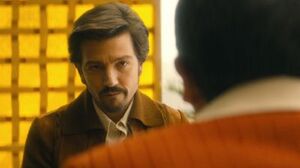 Camelot is the first episode of Narcos Mexico. It was released on Netflix on November 16, 2018.

When the army pillages Sinaloa, an ambitious pot farmer pitches a plan to build a drug empire in Guadalajara. A young DEA agent transfers to Mexico.

The details of what happened in this episode is

A list of all people who appeared in this episode...